In the field of sports, the study of biomechanics is a very important part, not only as a means of analysis for sports training [1], but also as a guide for sports injuries and injury prevention [2,3], and biomechanics has been widely used in the study of various sports [4]. Landing after jumping is a common action in daily life. Whether it is landing with one foot or with two feet, the great impact load produced instantaneously will impact the bones and muscles of the lower limbs. In sports, landing after the long jump is also very common and plays an important role, which has been widely used in sports such as basketball, volleyball, and football [5]. In the perspective of safety, when landing with a single foot, the load is completely borne by unilateral limb, which is easy to cause limb injury. However, in most ball games, single-foot landing is more common, which is more conducive to subsequent actions such as stop and direction change. Therefore, the landing stage of various sports has been widely concerned by researchers. Leppänen et al. [6] compared the kinematic differences in vertical drop jump (VDJ) between basketball players and floorball players and found that the knee valgus angle and knee flexion angle of floorball players were larger and that the valgus angle of female players was significantly larger than that of male players. A study of Stephenson et al. [7] analyzed the relationship between the available time to react (ATR) and knee joint biomechanics. They studied 45 jumping experiments of 34 leisure athletes and found that knee torque decreased in the direction of medial jumping with the decrease of ATR but increased in the direction of lateral jumping. Taking 18 healthy women as subjects, Cannon et al. [8] analyzed the effects of the trunk and hip mechanics on the knee joint. They found that the transverse plane rotation stiffness of the hip joint reduced the abduction moment of the knee joint during landing, and the rotation stiffness of the lumbar joint reduced the abduction angle and moment of the knee joint, which verified the importance of proximal joint rotation stiffness in preventing knee abduction during landing. Koshino et al. [9] studied 22 healthy college students and analyzed the kinematics of the hind foot relative to the lower leg, knee, and hip joint during walking and single-leg landing. They found that the valgus/varus and external/internal rotation of the rear foot were closely related to the adduction/abduction of the hip joint during walking but had a weak correlation with the knee joint. During single-leg landing, the correlation became stronger. The coupling angle showed that hip movement relative to rear foot movement was greater than knee movement relative to rear foot movement (p < 0.001). Badminton, as a non-contact sport, has been widely loved by people [10], but it has strong antagonism and high intensity [11]. With “fast” as the core, badminton is easy to cause sports injury [12]. Badminton has high requirements for the explosive power of athletes’ lower limbs.

At present, there has been a lot of research on badminton, such as the recognition of movements [13], the analysis of tactics [14], the effects of fatigue [15], and the development of wearable teaching systems [16]. Single-leg landing is also an important action in badminton, but there are few studies comparing the characteristics of the left and right legs when landing on one leg. Therefore, taking male badminton players as the subjects, this paper compared the biomechanical characteristics of players’ legs when they landed on one leg to understand the differences between the two legs in aspects of buffering ability, stability, etc. This work aims to provide some guidance for making training plans and preventing sports injuries and offer some theoretical support for research on injury prevention and stability control in the field of sports.

Twenty male badminton players were selected as the research subjects. They all took the right hand as the holding hand and the right leg as the dominant leg. They were healthy and in good mental condition. They underwent no physical injury in the past year. They did not take strenuous exercise 48 h before the experiment. All of them understood the content and process of the experiment and signed the informed consent. The general information of the players is shown in Table 1.

The kinematics related data were obtained using the British Vicon infrared high-speed motion capture system (Model No. T40) (Fig. 1). The system included ten high-resolution infrared cameras. The diameter of the marker was 14 mm, and the sampling frequency was 200 Hz.

The kinetic data were acquired by Switzerland KISTLER three-dimensional force measuring platform (Model No. 9287B) (Fig. 2). It was equipped with an external signal amplifier. The sampling frequency was 1000 Hz. It collected data synchronously with the Vicon system.

The action studied in this study was a single-leg landing with the ball overhead. The overhead ball is a kind of high ball stroked by the opponent. The player should block the ball in the backfield or midfield with one arm lifted high over the head and return the ball to the opponent’s field (Fig. 3). In the course of the movement, the body leans back, the right foot swings forward, the left foot is supported behind to maintain balance, the hitting point is over the head, and the medial side of the left foot lands on the ground before transitioning to the entire foot. In the process from the lower limbs touching the ground to the knee joint bending to the maximum angle, the lower limbs are often in the limit state, which is easy to be injured. Therefore, comparing the biomechanical characteristics of the two legs can understand the causes of injuries better.

The athletes wore the same clothes, warmed up for ten minutes at the speed of 8 km/h, and stretch the body to fully exercise the body’s joints. The research action was single-leg landing after returning the overhead ball. The athletes were asked to completely familiar with the action and practice until they could fluently complete the action. 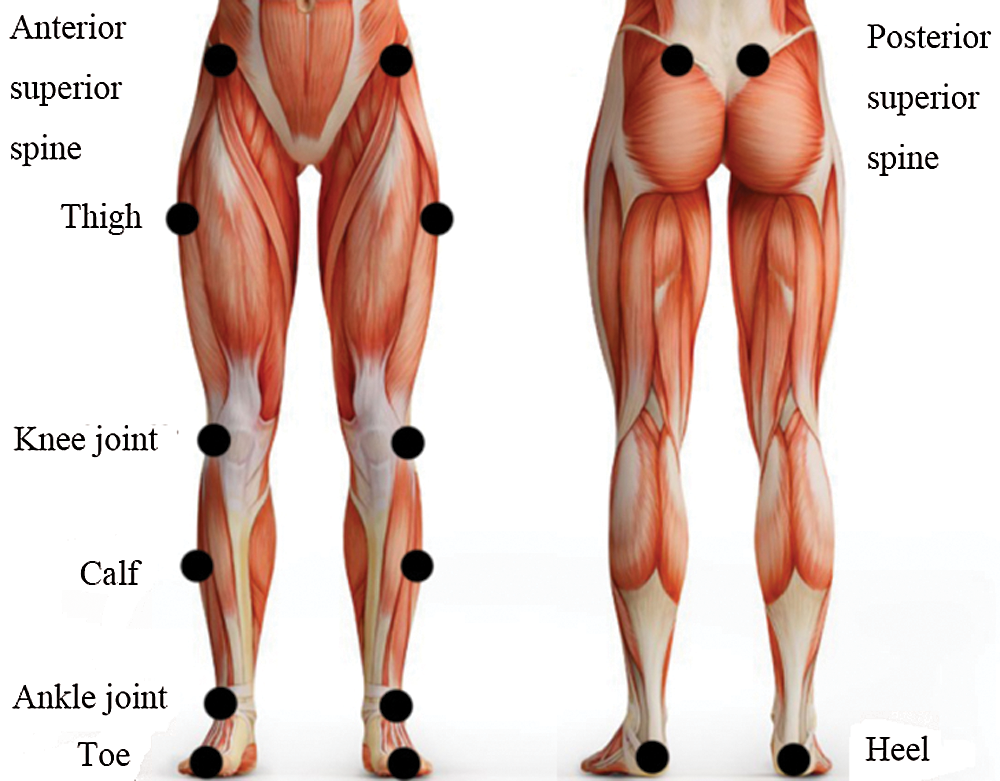 Figure 4: The paste positions of the markers

In all the tests, the ball was served by the same badminton player. The research subject stood in the midfield and backfield near the center line. The high ball, which was sent by the opponent, was blocked by lifting the arm over the head and stroked to the opponent’s field. Three groups of successful data of the test action were collected from each subject, i.e., the left foot fell on the force measuring platform completely. The testing flow is shown in Fig. 5.

The collected data were processed and calculated in Visual 3D motion analysis software. The measurement of joint angles of the lower limbs are shown in Table 2.

The data were sorted out and summarized by Excel 2007, and statistically analyzed and processed by SPSS 22.0. The data results were expressed as . The comparison between groups was performed by t-test, and 0.05 was taken as the significance level.

The comparison of three-axis gravity center positions at the moment of landing with a single foot is shown in Table 3.

The comparison of the angles and velocities of the lower limb joints at the moment of landing is shown in Table 4.

Range of joint motion refers to the maximum motion range of a joint during a single-leg landing. The comparison results of the two legs are shown in Table 5.

It was seen from Table 5 that there was no significant difference in the range of joint motion between the two legs (p > 0.05), but specifically, the range of joint motion of the right leg was slightly larger than that of the left leg. In the process of single-leg landing, the motion range of the ankle joint was the largest, 40.12 ± 6.46° for the left leg and 41.09 ± 7.31° for the right leg, followed by the knee joint and the hip joint.

The landing buffer time of different joints is shown in Fig. 6. 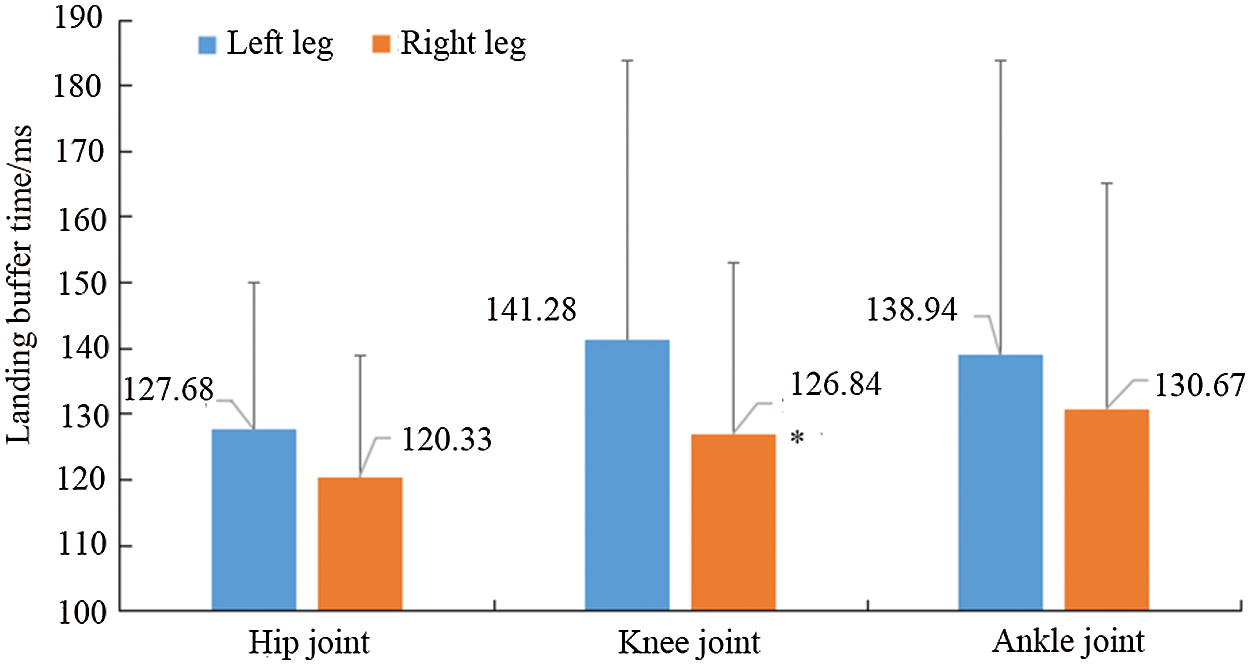 The comparison of the kinetic data between the two legs at the moment of landing with a single leg is shown in Table 6.

During human movement, the possibility of sports injury is very high. Especially in the process of competition, the probability of injury is very high. Anterior cruciate ligament (ACL) injury is a very common injury [17], which widely exists in sports such as football [18] and rugby [19]. The actions that are easy to cause ACL injury include landing support, side cutting, take-off, etc. [20,21]. Unreasonable landing methods will increase the risk of ACL, and ACL injury will bring great pressure to the body and mind of athletes [22]. Therefore, it is very important to understand the biomechanical characteristics of landing and prevent ACL injury.

This paper took ten male badminton players as the subjects and compared the biomechanical differences between two legs when they landed on the ground with a single leg. The comparison of the kinematic data demonstrated that the right leg had a lower center-of-gravity position, smaller joint angle and speed, and larger range of joint motion, and the motion range of the ankle joint was the largest, followed by the knee joint and the hip joint. Considering the stability of the human body, the lower the position of the center of gravity is, the greater the stability is, and the more stable the landing is. Therefore, the stability of the right leg is higher during landing, while the unstable left leg is easy to be injured. The range of joint motion of the left leg was small; thus, the left leg would present a relatively rigid posture when landing, which was easy to cause injury. The comparison of various joints suggested that the ankle joint had the largest range of motion and was the first to land, i.e., it borne a great impact force and had a larger injury risk. In general, the joints of the right leg had better flexion and smaller velocity, i.e., the right leg had stronger stability, and the joints of the left leg presented the opposite characteristics, i.e., the left leg had poor stability. The comparison of the kinetic data demonstrated that the right leg had smaller GRF, PVGRF, and lower limb stiffness and longer time to peak force, which was conducive to reducing the vertical impact force of the limb. A larger ground reaction will increase the possibility of cartilage and soft tissue injury, which may cause an ACL tear. A lower limb stiffness refers to the ability of the limb to resist deformation. By comparison, the stiffness of the left leg was significantly greater than that of the right leg (p < 0.05). A larger lower limb stiffness will increase the risk of sports injury. Larger GRB, PVGRF, and lower limb stiffness of the left leg may be caused by the insufficient flexion of the limb.

In general, in the single-leg landing action, the right leg has better stability and smaller injury risk. Therefore, in the training process, athletes should strengthen the ability to control the lower limbs, especially the left leg, to improve the stability of the lower limbs and avoid sports injury.

This paper compared the biomechanics of the two legs of male badminton players when they landed on the ground with a single leg. Through the processing and analysis of the experimental data, the author found that the right leg had a lower center-of-gravity position, smaller joint angles and velocities, a larger range of joint motion, shorter buffer time, smaller GRF, and longer time to peak force, which made the right leg have stronger stability and smaller injury risk. Therefore, in the training process, the players should strengthen the stability training of the left leg to reduce sports injury.

Funding Statement: The author received no specific funding for this study.

Conflicts of Interest: The author declares that they have no conflicts of interest to report regarding the present study.