The world is in the era of the rapid development of infrastructure construction. Building materials are highly needed and heavily used, resulting in a large amount of construction and demolition (C&D) wastes. As the world’s largest consumer of raw materials, construction industry consuming 40% of the planet’s available natural resources on the planet annually, which goes against the idea of sustainable development [1–3]. Among all the areas, China has been considered to have the world’s fastest-growing construction and demolition industry, which generating nearly half of the demolition waste in the world [4,5]. Besides, the random dumping and disorderly landfill of C&D wastes may also cause secondary pollution to the environment. Producing recycled aggregate is the most effective way to solve this issue. The properties of recycled aggregate have been extensively studied, and the application of recycled aggregate is well-developed as well [6–9]. Additionally, a large amount of dust is generated as a by-product during the process of recycling. Dust with a particle size below 150 μm is referred to be made into recycled powder (RP), which accounts for about 20–35% of the total C&D wastes [10,11]. It may cause air and groundwater pollution if PR is not recovered properly. The government has enacted a series of environmental laws that limit the over-exploitation of natural resources, resulting in the rising of the prices of natural sand, and cement. RP, as a by-product in the process of C&D waste disposal, has a relatively stable market price but has been rarely studied. Therefore, the reuse of RP is imperative to improve its utilization efficiency. It can reduce the demand for natural resources.

Recently, researchers have explored the pozzolanic effect of RP on cement, and studied its potential in partially replacing cement as a compensating material. Sun et al. [12] studied the addition of RP to concrete as a cement substitute, indicating that RP could promote the hydration of cement. Turanli et al. [11] used different types of ground clay brick (GCB) and measured their activity indices. It was found that GCB could meet the strength activity requirement of American Society for Testing and Materials (ASTM) criteria when it was used to replace cement. Also, GCB effectively suppressed alkali-silicon reactions. Liu et al. [13] investigated the potential of concrete-clay brick hybrid recycled powder (CB-HRP) as a supplemental material and discussed the change of the concrete including fluidity, compressive strength, and microstructure. It was found that CB-HRP affected the strength of the fabricated concrete.

Studies on RP indicate that it has the potential to be used as a supplementary cementitious material. Therefore, a solidifying material can be rationally prepared from RP. So far, the commonly used materials for cementitious solidification are cement, lime, and fly ash, etc. [14]. However, they also have certain disadvantages. For example, lime has a poor water stability; solidified soil made from fly ash shows low mechanical strength; cement-based solidified soil using costs much higher [15]. From the perspective of resource-saving and environmental protection, the application of solid waste in industrial cementitious materials has been attracting the attentions of worldwide researchers. Gu et al. [16] developed a soil stabilizer for road subgrade based on original phosphogypsum, and the mass ratio of phosphogypsum to the entire stabilizer reached 60%. Wu et al. [17] used steel slag powder as a component in cement to form a new curing agent, and studied the strength degradation of the solidified soil in seawater. Hence, the re-purposing of solid waste can not only solve the problem of solid waste itself, but also reduce the cost of solidifying materials.

During water purification, sludge is always produced in waterworks. Since flocculants need to be added in this process, there are residual flocculants left in the sludge. If the moisture content of the sludge is low, the sludge is easy to coagulate and is difficult to disperse. Thus, the sludge with high moisture content is demanded [18]. There are several ways to comprehensively utilize waterworks sludge. One way is to use it as green soil [19] or adsorption material. It can also be used to remove pollutants in rivers or soil [20–24]. In addition, it can be used to prepare burning ceramsite [25] and sintered clay bricks [26,27]. Making sintered clay bricks emits greenhouse gases, polluting the environment. So, it is a good idea to use waterworks sludge to prepare non-fired bricks. However, in China, the main disposal method of waterworks sludge at the present stage is still to discard it into natural waters and landfills [28].

The RP was obtained from a construction waste disposal company in suqian, Jiangsu, China. RP was collected from the fine dusts produced during the crushing process of recycled aggregate. The recycled aggregate was made by crushing waste concrete. In this paper, RP was divided into three types, namely, coarse powder (0–0.017 mm), medium powder (0–0.074 mm) and fine powder (0–0.035 mm). The Portland cement (PC) is the original 42.5 Portland cement produced by Anhui Conch Group Co., Ltd., China. The OWS used in the experiment was from a waterworks in Nanjing, Jiangsu Province, China. The water content of sludge was up to 60%. The chemical compositions of the three materials (RP, OWS, and PC) were detected by the X-ray fluorescence spectrometer before the experiment. The corresponding test results are shown in Table 1. 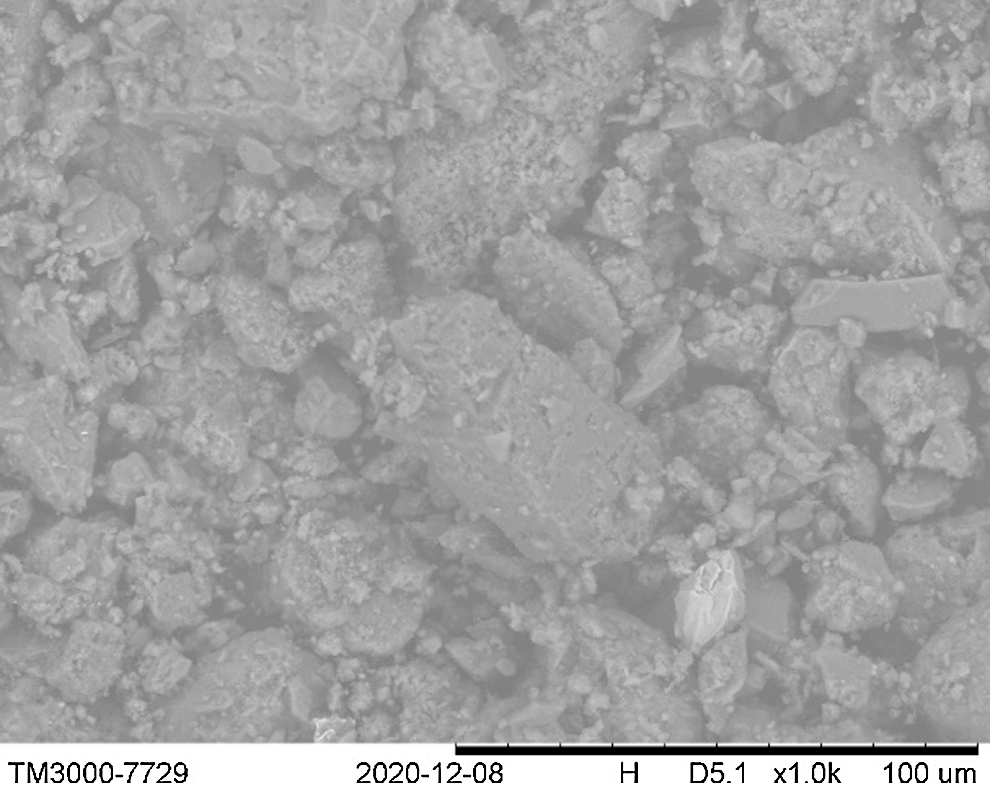 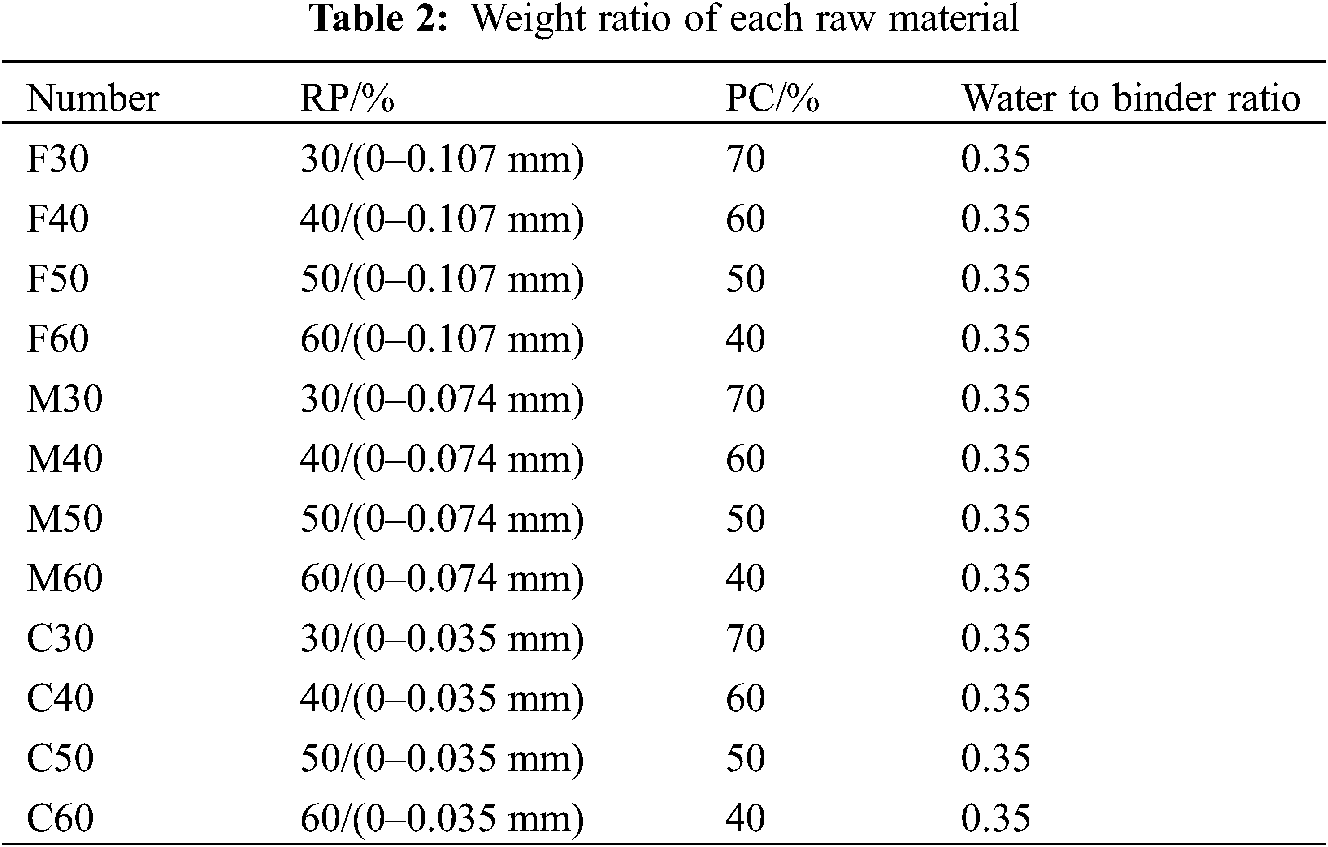 According to the designated weight ratio in Table 2, raw materials and water were weighed. First, a certain proportion of RP and PC were well mixed. Then a certain amount of water was poured into the container of a cement slurry mixer. Next, the well-mixed solidifying material was added to the cement slurry mixer. The mixture was slowly stirred for 2 min, and then quickly stirred quickly for another 2 min, resulting in the required slurry product. The water/solid ratio used in the study was 0.35. The slurry was cast into the 20 mm × 20 mm × 20 mm mold. Nine samples for each formula were prepared in total to test the UCS. After the samples were demoulded, they were placed in the standard curing box with a temperature of 20 ± 2°C and a humidity of 96%.

To test the volume stability of the samples, the prepared slurry was poured into 10 mm × 10 mm × 55 mm prismatic steel molds. To facilitate the measurement of the length of the samples, steel nails were installed at the ends of the molds before the slurry was cast.

UCS was tested by a microcomputer-controlled automatic compression tester (WHY-200, Shanghai Hualong Test Instruments Corporation, Shanghai, China.). Three cubic samples (20 mm × 20 mm × 20 mm) cured with the same aging condition were tested. The average value of three test was identified as the UCS of the sample. The conditions of curing age were set as 3 days, 7 days, and 28 days. In parallel, the UCS test method of the non-fired bricks was the same as that of solidifying material, with curing ages of 7 days and 28 days.

The X-ray diffraction (XRD) test was carried out to characterize the crystalline phases in the solidifying material samples. The hardened samples were ground and then passed through a 200-mesh sieve. The powder sample was subjected to X-ray diffraction analysis (Rigaku-2500, Japan). An angular range (5–55° 2θ) for scanning was used with a step interval of 0.02°, and a scan speed of 10°/min was set throughout the test.

The heat of hydration was tested by isothermal conduction calorimetry (ICC). Heat of hydration was tested by TAM Air Isothermal calorimeter (Themmetric AB, Sweden). First, the was set to 20°C, then four gram of solidifying material were weighed (the water-to-binder ratio was set as 0.35). The solidifying material and water were added to the plastic bottle, stirred for 30 s, and then put the bottle into the isothermal calorimeter for continuous testing for 72 h.

In order to obtain the details of the pore structure (pore size distribution and porosity), the samples were tested using a GT-60 mercury intrusion porosimeter (Kanta, USA) with both low- and high-pressure ports was used. Low- and high-pressure parameters range from 15–50 psi and 20–30000 psi, respectively. Before the test, the sample was crushed into a granular sample with a diameter of about 3 mm, and then dried at 60 ± 2°C for 4 h.

The experiment was carried out by immersing the prepared non-fired brick samples (curing for 28 days) in the water for a while. When immersion time reached 7 days or 28 days, the sample was taken out of water, and the moisture on the surface was gently absorbed. The Ks of the sample was calculated according to Eq. (2):

where Ks= stands for SC; f and F represent the UCS values of the sample before and after the immersion in water for a specified time, respectively.

3.1 Properties of the Solidifying Material 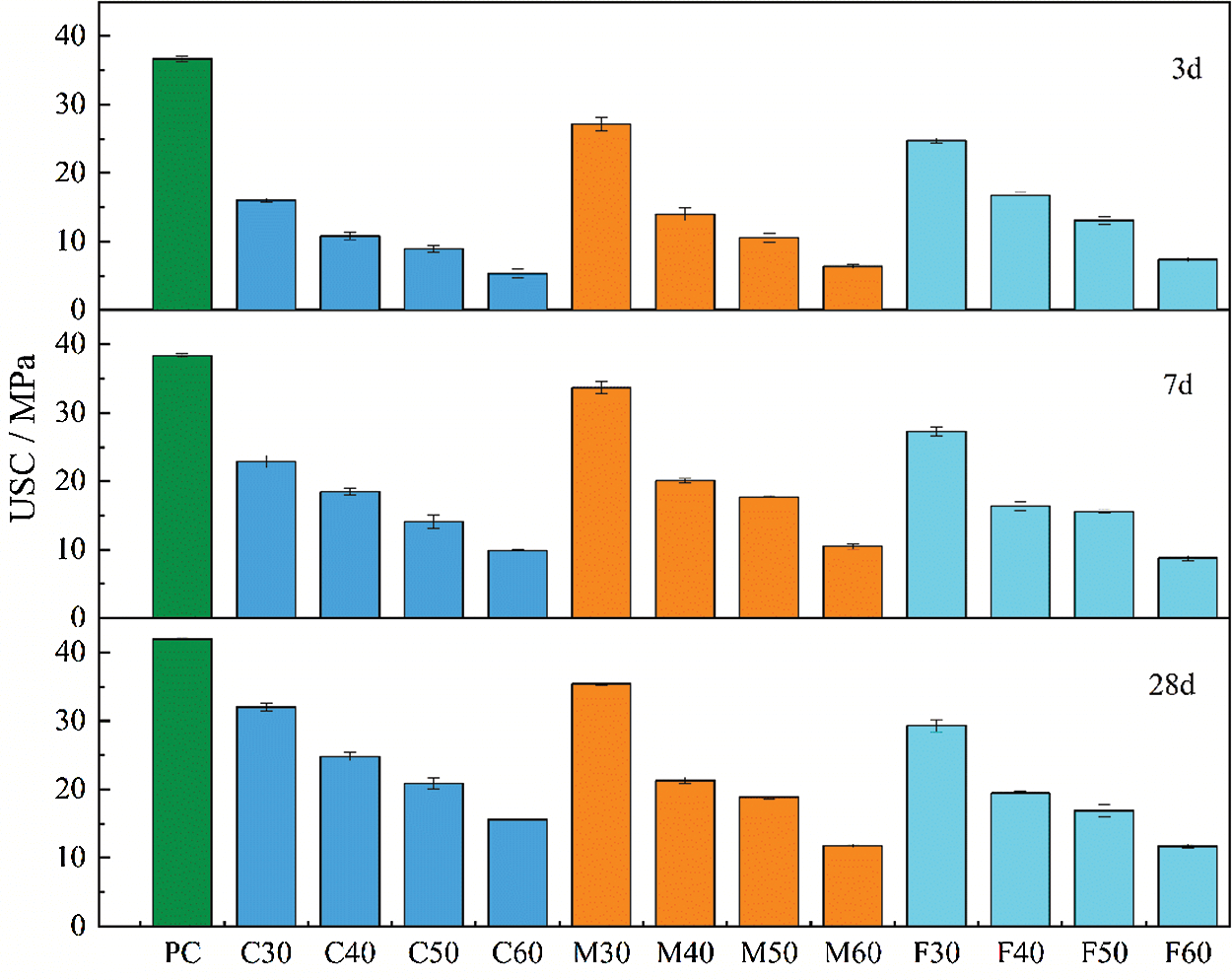 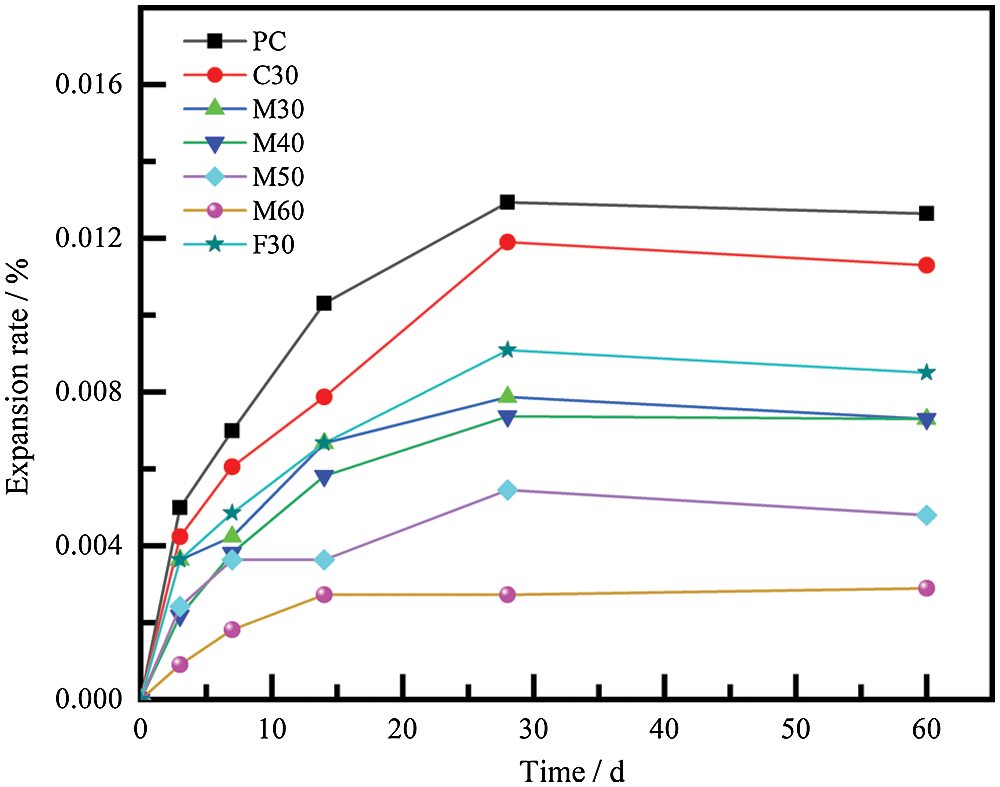 Fig. 4 exhibits the XRD results of the solidifying materials with various RP additions. The main phases of the samples were quartz, portlandite, and calcite. Since the main phases of RP were calcite and quartz, so as the content of RP increased, the corresponding peaks in the solidifying materials also increased. In contrast, the portlandite content decreased with the increase of RP doping. One possible explanation is that there was a very little hydrated component in RP. With the increase of RP dosage, the hydration degree decreased, resulting in the decrease of portlandite content. In addition, the peaks of portlandite did not change significantly when the fineness of RP was changed. The results showed that RP barely participated in the hydrated reaction and tended to play a filling role. 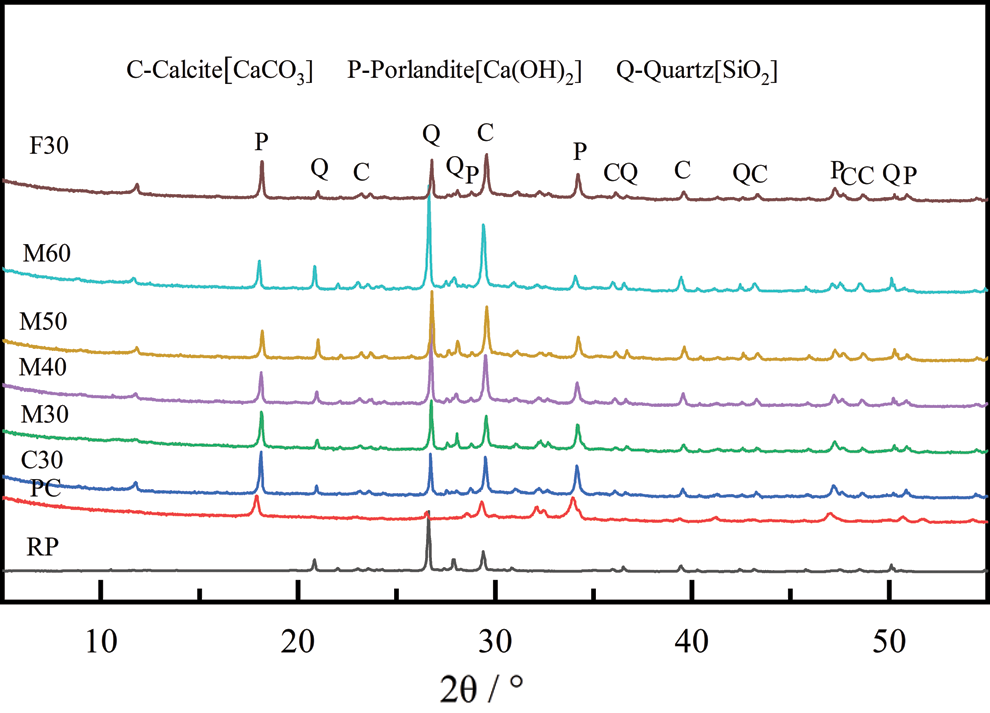 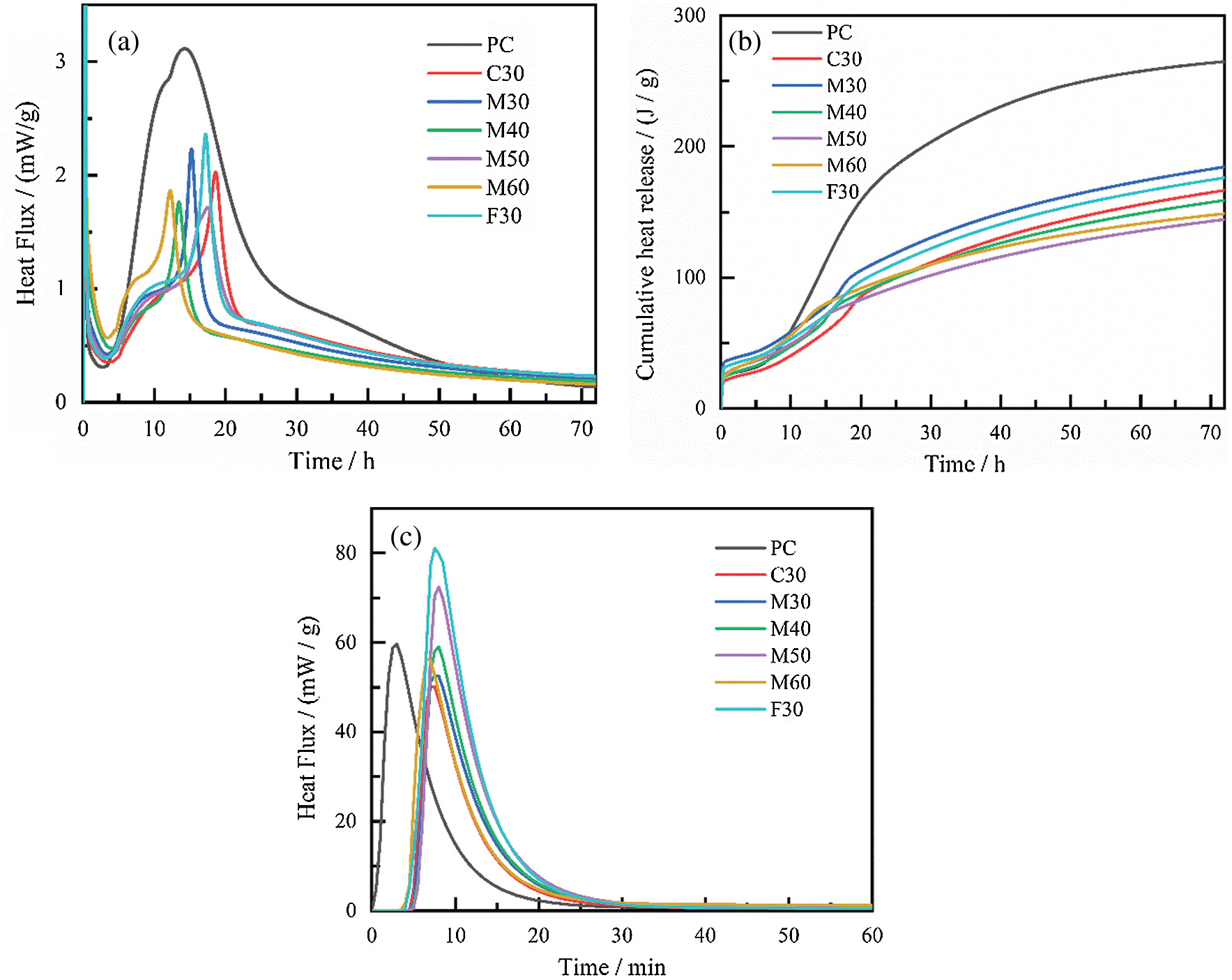 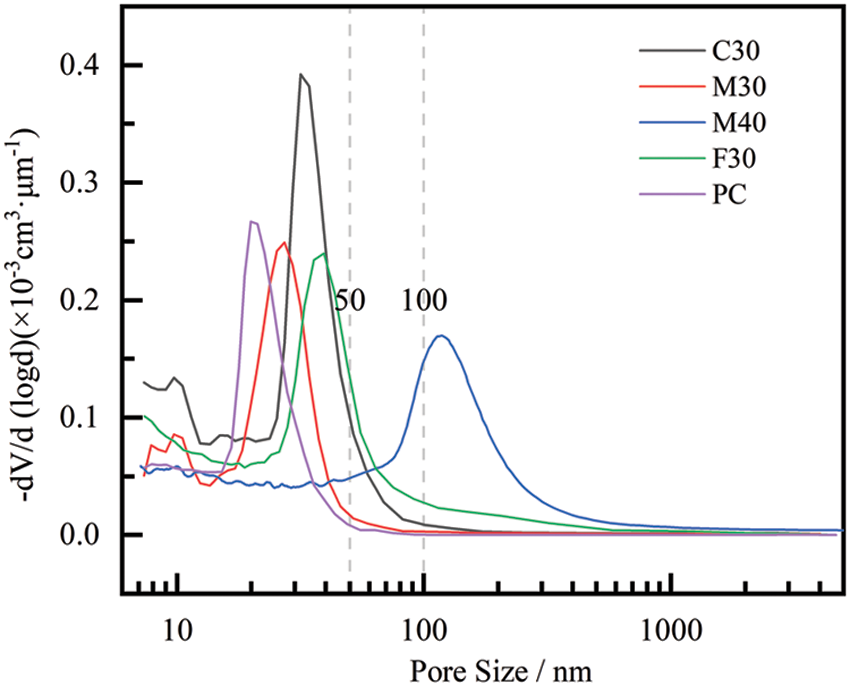 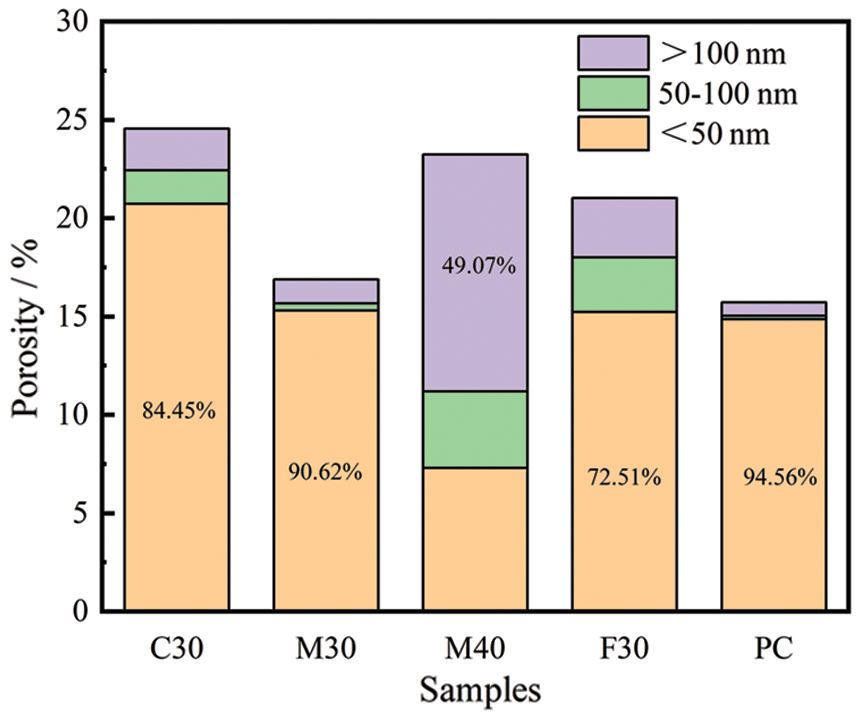 3.2 Preparation of Non-Fired Bricks from OWS

Based on comprehensive evaluation of the UCS and volume stability of the solidifying materials, M30 showed the highest UCS and better volume stability. Hence, M30 was selected as the best formula. 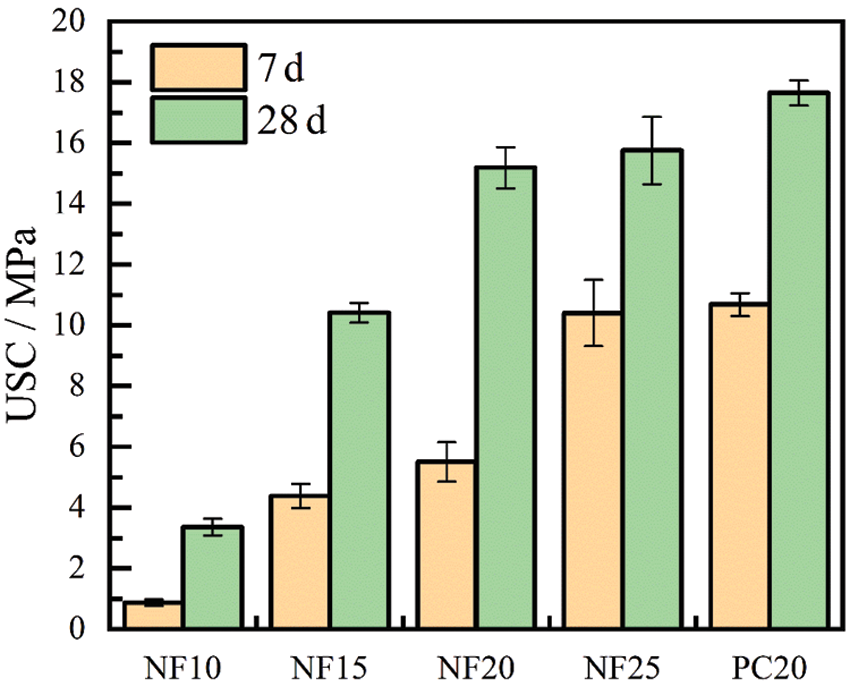 Figure 9: (a) OWS; (b) OWS after mixed with solidifying material and recycled aggregates; (c) Non-fired bricks

Under China’s existing environmental protection requirements, C&D waste and waterworks sludge are both general solid waste and are prohibited from being discharged at will. Since they have a potential risk of causing environmental pollution, a specialized enterprise is needed to dispose them. It costs about $30 for dispose of one cubic meter of sludge. If the sludge and C&D wastes are used for comprehensive utilization to prepare non-fired bricks, their utilization value could be improved.

The XRD results showed that RP did not participate in the hydrated reaction and only played a filling role. The results of the heat of hydration showed that the heat flux of paste was reduced by the addition of RP. M30 had the maximum cumulative hydration heat except for PC, indicating that M30 had the highest extent of hydration, which agreed with the large UCS value.

The results of the pore structure showed that the porosity of the solidifying material was increased by adding a large amount of RP. Compared with PC, the porosity of C30, M30, and F30 increased by 56.13%, 7.43%, and 31.72%, respectively. The result indicated that the filling effect would be weakened with the increase of finer powder content in RP.

Finally, M30 was selected as the solidifying material for OWS to prepare non-fired bricks. The UCS of NF20 was 15.19 MPa at 28 days. The 28-day SC of NF20 was 78.35%. Although a little sacrifice in the mechanical property was observed, the performance of NF20 non-fired bricks was still comparable to that of PC20. In conclusion, the preparation of solidifying material using RP could be a promising approach to improve the utilization efficiency of C&D wastes, which has a great potential in disposal of original waterworks sludge.

Acknowledgement: The authors would like to thank TopEdit (https://www.topeditsci.com) for linguistic assistance during preparation of this manuscript.