Evaluating the criticality of users in social networks is similar to the division of user influence in social networks. Ding believes that the more important the node location is, the more likely it [1]. Dalibor Fiala combines the PageRank algorithm with the co-occurrence of the author to explore the influence ranking of scholars in the academic network [2]. Current research on user influence mainly focuses on three mainstream levels: user post analysis, user characteristic information analysis, and social network topology analysis.

Social media posts are mainly based on current events or users’ personal feelings, and is an important way for users to attract attention from others. The criticality of users is generated by the form, type and quality of the content of the post, and accumulates and changes according to the content of different posts. Scholars at home and abroad have conducted relevant research on this. Barbieri’s research found that the topic of online posting is closely related to the credibility and prestige of the author, and established a cascade model of independent influence based on the topic [3]. Through research on WeChat public accounts, Qin Fen found that the title, length, picture and emotion of the content of the post are directly related to the influence of the post [4]. The rapid development of social networks, especially the role of user-generated content information in judging the criticality of users is becoming more and more obvious. It is necessary to dig deeper into the content of postings as an important carrier of the criticality of users to find its positive effect on the influence of nodes.

Social users form social networks through user attention, content browsing and forwarding, and their influence is spread and spread through the network. Social network topology is an important direction for studying user influence. Scholars study the location of nodes and network structure in social networks. Reference [8] To measure the criticality of users. The more common method based on the network structure is the K-coverage algorithm that focuses on the cascading relationship between users [9]. Point centrality and betweenness centrality are also effective methods to determine user influence. Reference [10] The most widely used of all methods is the PageRank algorithm, which establishes a random walk model of node influence based on quantitative and quality assumptions [11]. On the basis of the PageRank algorithm and the characteristics of social networks, scholars evolve the mathematical model of the algorithm and derive many extended algorithms. Reference [12] The influence measurement method based on network topology is clear and direct, and it can grasp the overall structure of social network in a macroscopic way. In particular, the PageRank algorithm has played an important role in theory and practice [13].

The key degree of user nodes of social networking sites is mainly measured from two aspects: the influence of users and the structure of users. Reference [16] The influence of users can be reflected by the number of users’ fans, the popularity of microblog per unit time and other data. The user’s structure is obtained by analyzing the user's position in the whole social networking website topology. Therefore, we can define the user’s criticality as Eq. (1).

In formula (1), is the criticality of user i, is the influence of user i, and is the structural value of user i. and are their respective weight values.

The user influence of social networking sites is the degree of influence the user has on the crowd through the information released. Reference [17] In reality, the factors that affect the influence of user nodes on social networking sites include not only objective indicators such as the number of users’ fans and likes, but also subjective indicators such as the activity of users’ fans.

Due to the differences of users in social networking sites, it is unreasonable for the PageRank algorithm to give all users the same initial PR value before the iteration starts. Four elements can be added to evaluate the direct influence of users: the number of fans, the number of works, and the quality of the works. And authentication, give users a different initial PR value. At the same time, silent fans and zombie fans without any dynamics can be preliminarily screened out, and they will be excluded when constructing the topology.

The number of users’ fans is a basic indicator of users’ influence on social networking sites. The more fans a user has, the more links the node will have in the topology, and the greater its importance; Publishing works is the most important way for users to maintain their influence. The more works a user publishes, the greater its influence will be; In the social networking platform, work quality is an important factor for users to maintain their own influence. The number of video views, comments and forwarding can be used as the standard to measure video quality; Larger social networking sites such as microblog and Zhihu have launched authentication mechanisms. In the view of ordinary users, these authenticated users have been screened by social platforms and have higher credibility and authority than other users.

So we can define the direct influence of users as formula (3).

It is impossible for users on social networking sites to pay equal attention to users on the watch list. Ordinary users are often interested in a small number of users and are willing to invest in the promotion of their works. This preference is manifested in the interactive behavior between users, which can increase indirect influence for users, which is measured by the following behaviors between users and the likes, comments, and forwarding behaviors between users.

In the network topology, the following relationship forms a pair of link-in and link-out relationships, and the influence of social network nodes can be spread through the network. The three interactive behaviors of like, comment, and repost show how much the user likes the user they are following. Reposting indicates that the higher the importance of the user, the comment is the second, and the like is the least. These three interactive behaviors quantify the close relationship between fans and followed users. The higher the degree of closeness, the fans will allocate a larger proportion of the contribution value to the user. Solve the problem of the unreasonable proportion of PR value transmission by quantifying the closeness between users.

So the user’s indirect influence can be defined as formula (5):

In formula (5), d is the damping coefficient, is the set of fans of user i, j is any fan of user i, is the degree of interaction between user i and fan j, can be expressed as formula (6):

Combining these two points, we can define the network structure metric value of the node as Eq. (9), where and are their respective weight values.

Therefore, the centrality metric value of the node can be defined as Eq. (10), and , , and are their respective weights.

Therefore, the metric value of the node's influence range can be defined as formula (11). 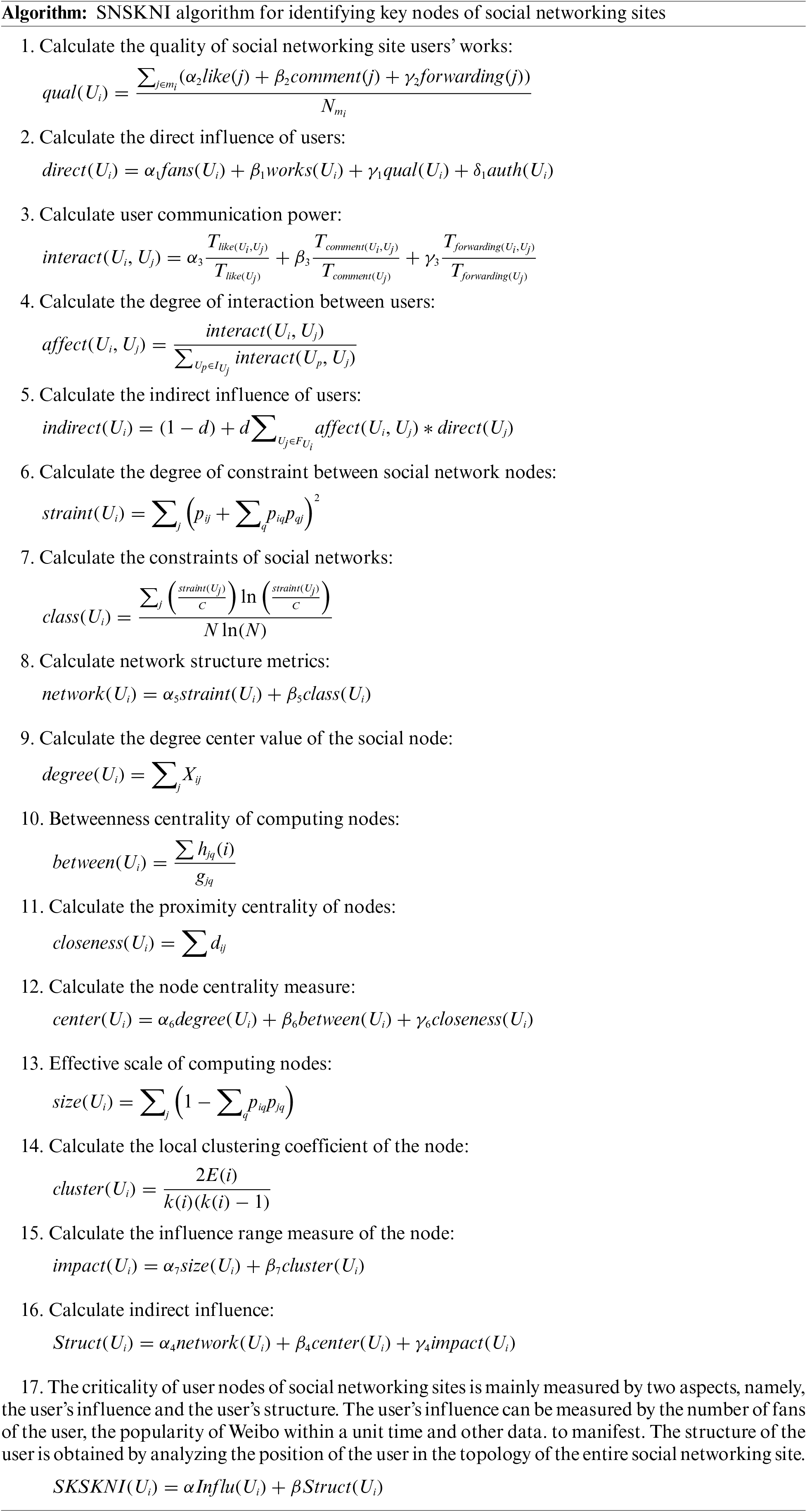 This paper uses the entropy method to determine the weight value needed in the system calculation process. After establishing a complex network based on the user relationship, use the function corresponding to the Python Networkx library to calculate seven indicators that affect the user's structure. The specific weight values are shown in the Tab.1:

The SNSKNI algorithm is used to measure the influence of users. Compared with the simple ranking based on the number of fans and the traditional PageRank algorithm, the characteristics of different users are considered, the influence of zombie fans is excluded, and the interaction between users is considered.

Fig. 2 shows that among the top 10 users with fans, the user influence of “China Mobile 10086”, “Central European Courier”, and “China National Geographic” ranks outside the 100. Analysis found that only a small part of the fans of these 3 users are among the 3000 users we selected, so in the user network we constructed, most of their fans are silent fans. In comparison, users with high influential rankings tend to have more fans among 3,000 users. For example, the “Communist Youth League Central Committee” has 1072 fans among these 3,000 users, and “China Fire” has 822 fans. 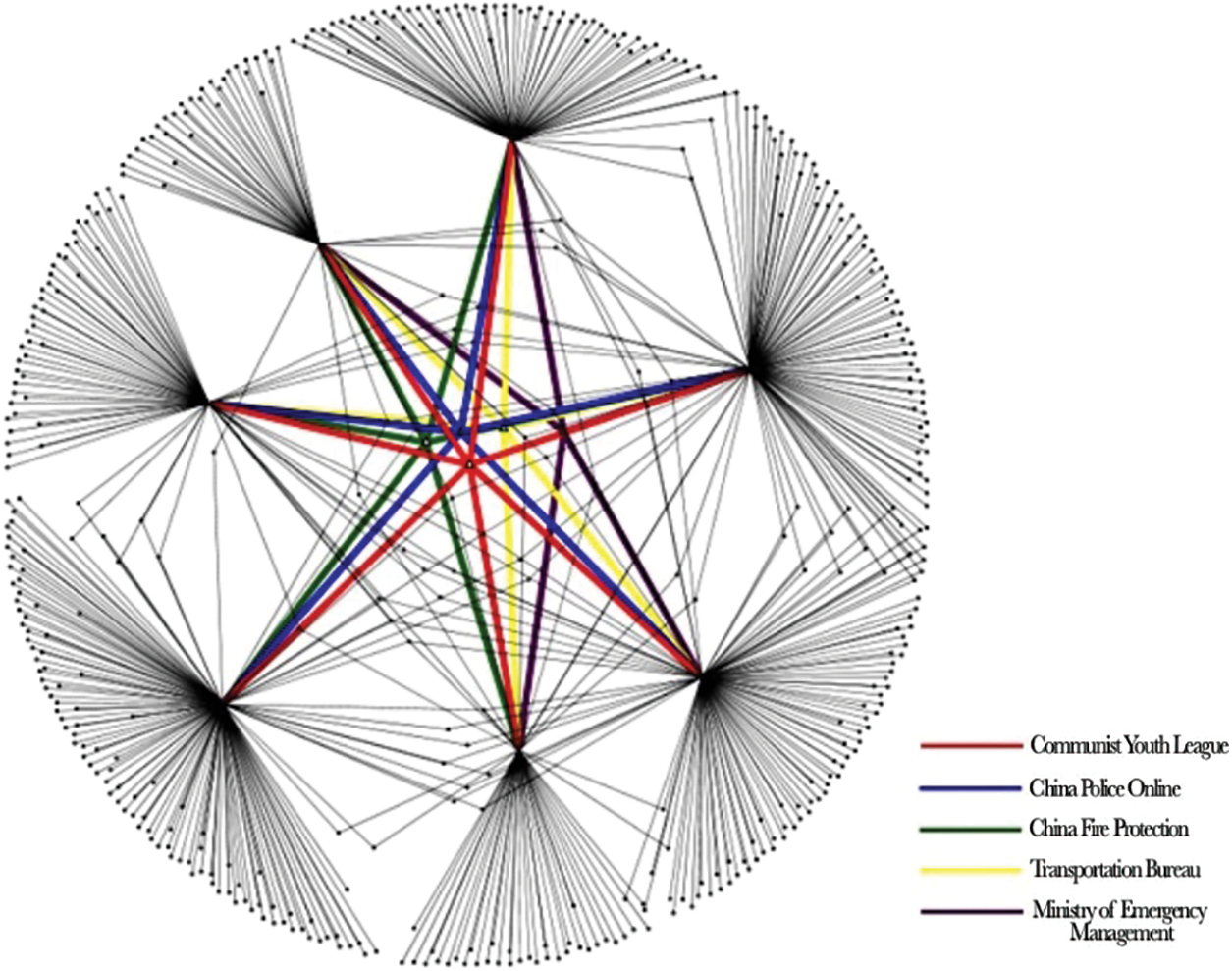 Figure 3: The top 5 structural indicators are the connections between users and communities

It can be found that the top 5 structural users are all connected to at least 5 communities, and these users assume the role of intermediary and transmitter in information dissemination. It plays an important role in the entire network structure of social networking site users.

Figure 4: Ranking display diagram corresponding to the results of SNSKNIS algorithm and other algorithms

The Tab. 2 below shows the comparison of the top 10 user rankings calculated by the SNSKNIS algorithm and the FOLLOWERS RANK algorithm.

The Tab. 3 below shows the comparison of the top 10 user rankings calculated by the SNSKNIS algorithm and the average forwarding algorithm. 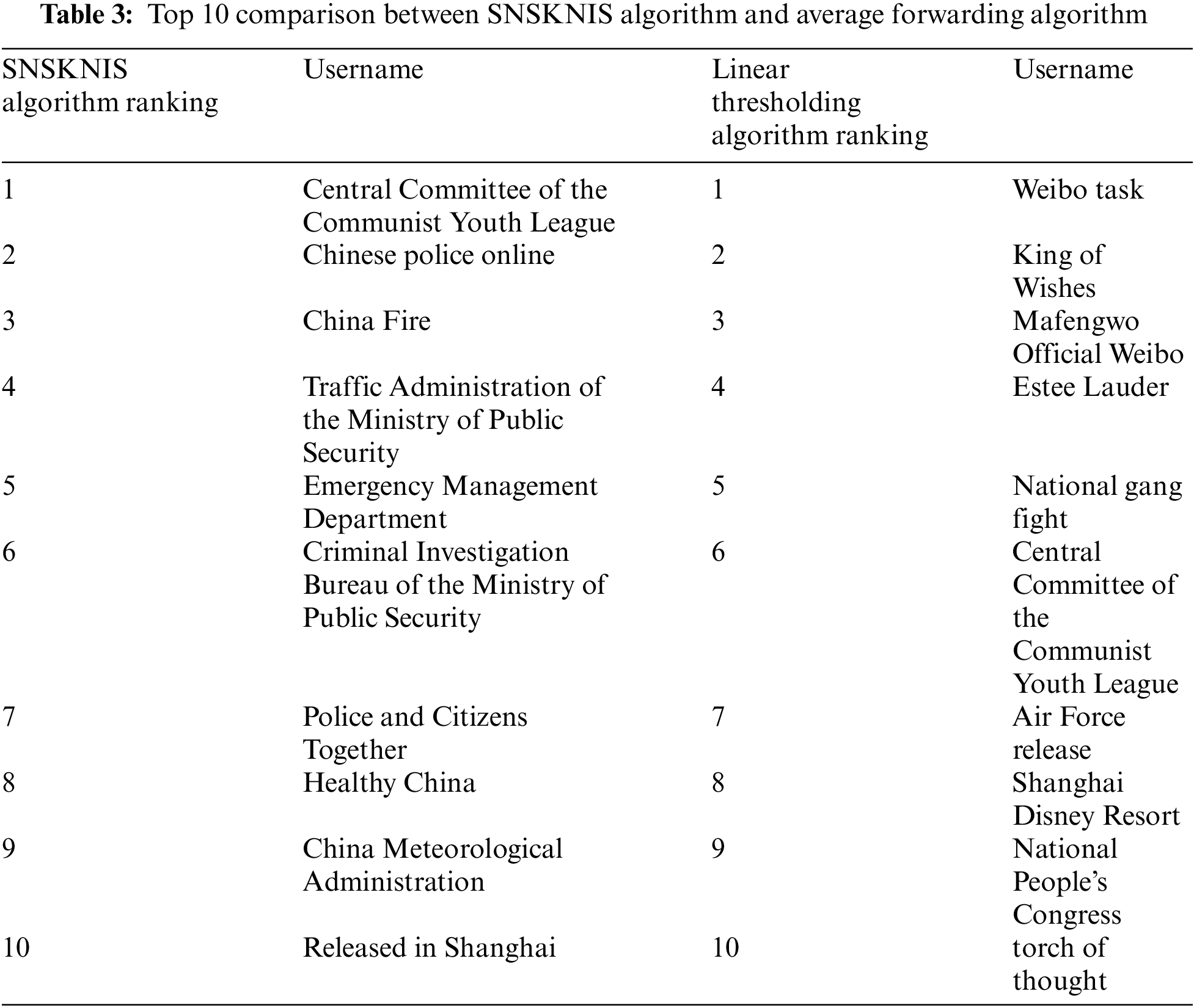 Through comparison, it is found that the results of the two algorithms are quite different. Among the top 10 users of the SNSKNIS algorithm, only one user from the Central Committee of the Communist Youth League ranks in the top 10 of the average forwarding algorithm. In the average forwarding algorithm, the content posted by the top 10 users is the content that the masses are interested in, which is easy to arouse people’s curiosity and desire to share, so they rank higher in the algorithm. However, this algorithm can only reflect the attractiveness of the user’s Weibo, and cannot fully reflect the degree of influence of the user.

The following Tab. 4 shows the comparison of the top 10 user rankings calculated by the SNSKNIS algorithm and the v-index algorithm. 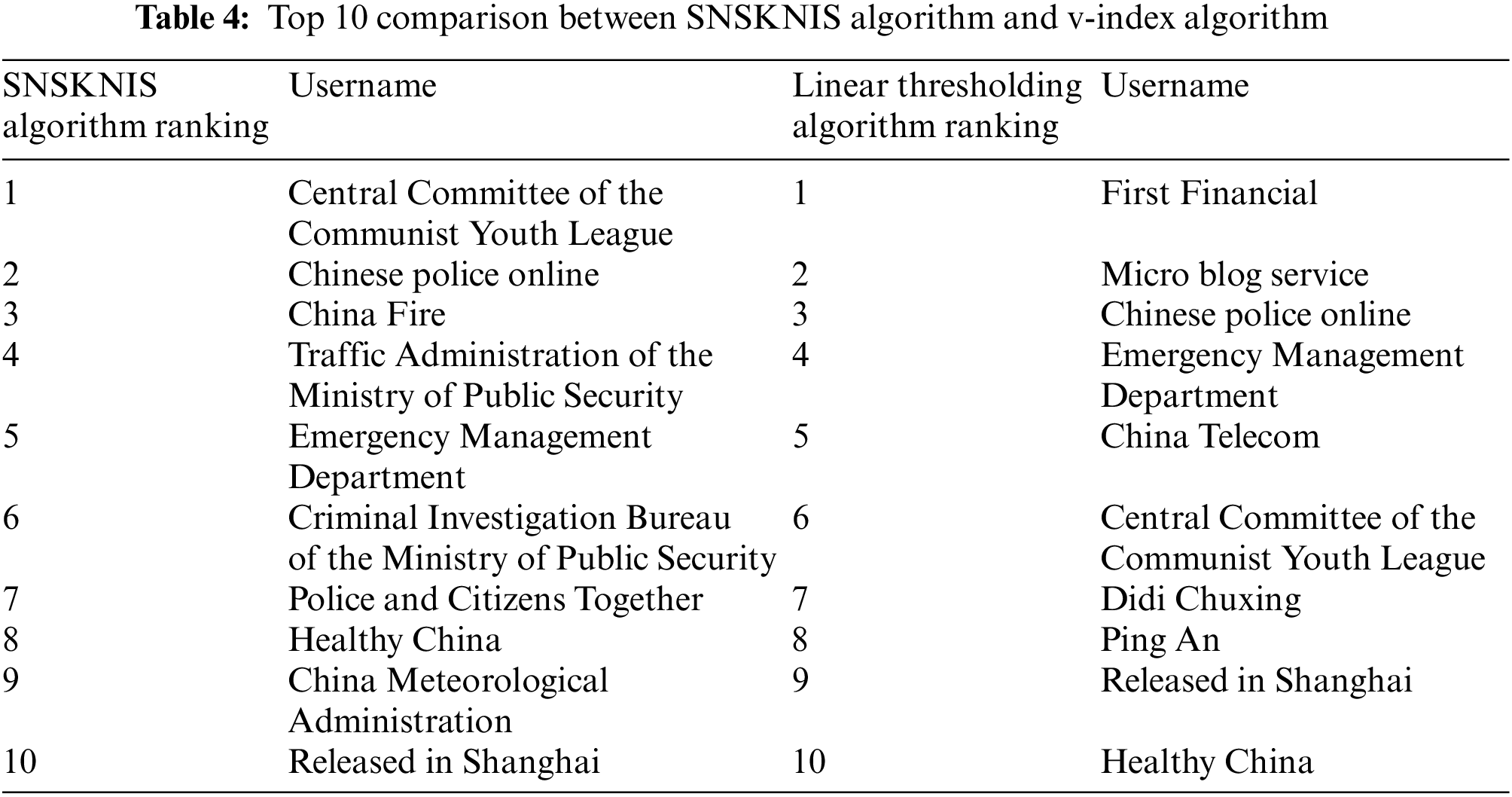 Through comparison, it is found that the results obtained by the SNSKNIS algorithm and the v-index algorithm show that although the influence rankings of some users are relatively close, there are still certain differences. After analysis, it can be seen that the threshold of the v-index algorithm is the total number of microblogs multiplied by the set value, and the number of microblogs whose forwarding volume is greater than the threshold is calculated, but this algorithm does not consider the situation that the threshold is too large due to the excessive number of users' total microblogs, such as Public accounts such as China Police Online that publish multiple Weibo posts every day have too high a threshold, resulting in too few Weibo posts with a forwarding volume greater than the threshold. Therefore, compared with the SNSKNIS algorithm, the influence ranking of the v-index algorithm is less convincing.

The Tab. 5 below shows the comparison of the top 10 user rankings calculated by the SNSKNIS algorithm and the linear threshold algorithm. 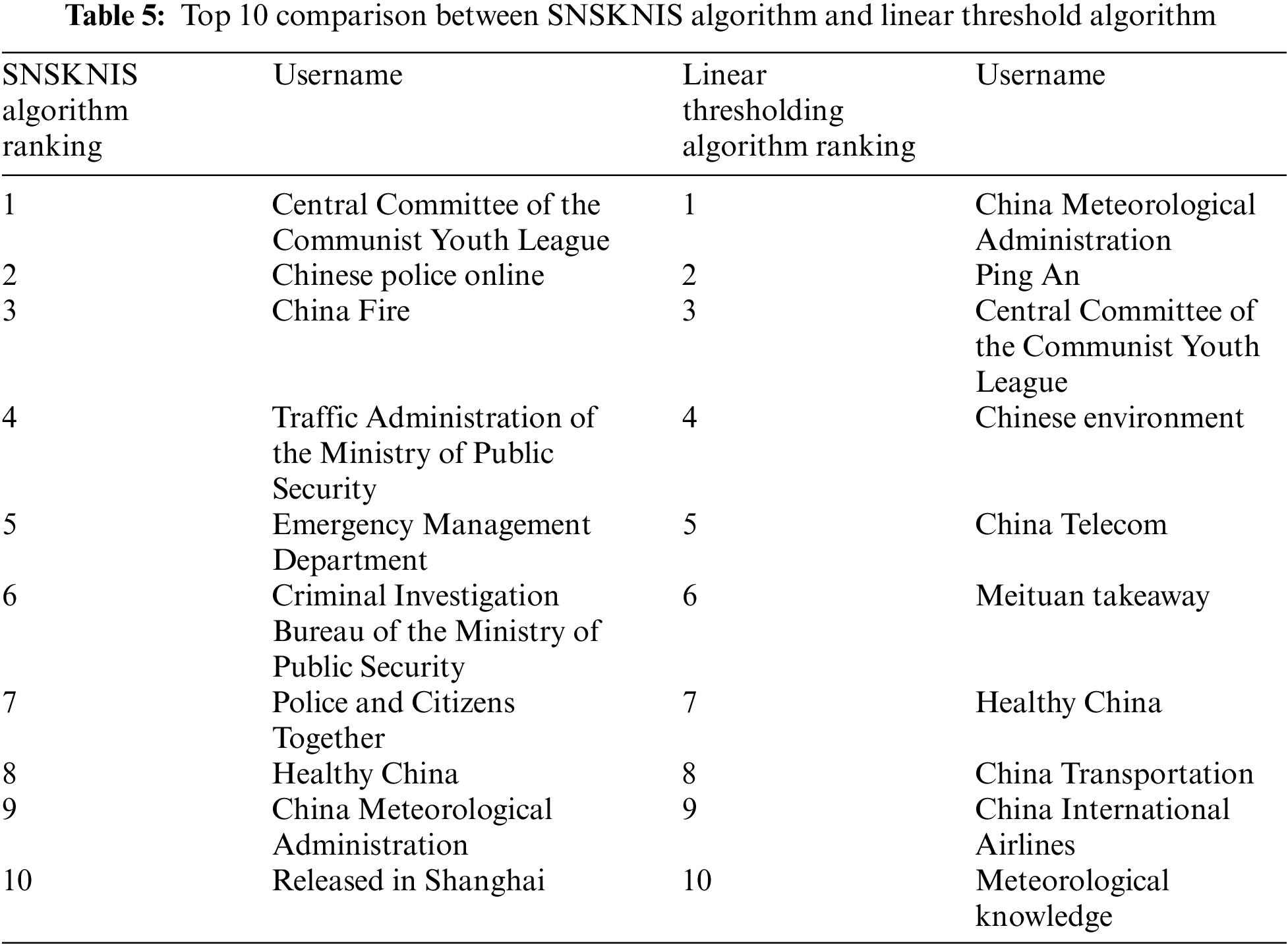 This paper improves the traditional PageRank algorithm, introduces some structural indicators of nodes in complex networks, and designs a key node identification system for social networking sites based on PageRank. Through the experimental analysis of the Sina Weibo platform, the system can more accurately and objectively reflect the criticality of nodes in the entire network. The basic functions of the system meet the demand, but there are still some shortcomings. If the system interaction is low, user nodes cannot be added dynamically, and can only be imported through the back-end database; the supported social networking platform is single, currently the crawler script only supports the Sina Weibo platform as a data source, and it is necessary to write a data crawler or search for the corresponding social networking site The corresponding api interface can continue to be studied for corresponding problems in the future. 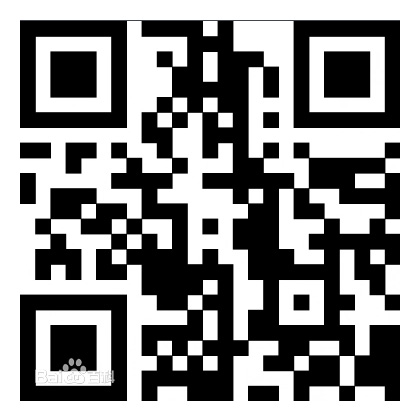