Concordant Atrioventricular Connection to L-Looped Ventricles with the Left Ventricle on Top of the Right Ventricle in Situs Solitus: A Case Report with 3D Modelling and Printing

Abstract: We report the case of a rare complex cardiac anomaly involving situs solitus, concordant atrioventricular connection with left-hand ventricular topology, and L-looped ventricles. The ventricles had a superior-inferior relationship with an inferiorly located right ventricle, which had a double outlet with far posteriorly located great arteries. The left atrium was elongated, with juxta-positioned atrial appendages on the right side. The 3D-printed model using a computed tomography scan taken on the fourth day of birth demonstrated the anatomy clearly and helped us decide on the surgical management.

A male infant weighing 2.9 kg was born at full term. Since fetal echocardiography demonstrated a complex heart anomaly with superior-inferior ventricles and an abnormal origin of the great arteries, the mother was referred to a tertiary hospital. There were no perinatal problems, and he showed no cyanosis or signs of respiratory distress early after birth. Physical examination revealed a grade 2 cardiac murmur at the left sternal border. Percutaneous O2 saturation ranged from 88% to 92% on room air.

His postnatal echocardiography and computed tomograms showed visceral and atrial situs solitus, and levocardia (Figs. 1–3). The systemic and pulmonary veins had normal connections to the right and left atria, respectively. The cardiac chambers and arterial trunks showed grossly abnormal spatial relationships, including right side juxtaposition of the atrial appendages, superoinferior relationship of the ventricles with the left ventricle on top of the right ventricle, and origin of both arterial trunks from the inferiorly located right ventricle, i.e., double outlet right ventricle (DORV). The left atrium was elongated forward, upward, and rightward to connect to the left ventricle in the superior aspect of the right ventricle (Figs. 1D and 3B). The right atrium was positioned normally and was connected to the right ventricle. Therefore, concordant atrioventricular connections were observed through the superiorly located mitral valve and inferiorly located tricuspid valve (https://video1). 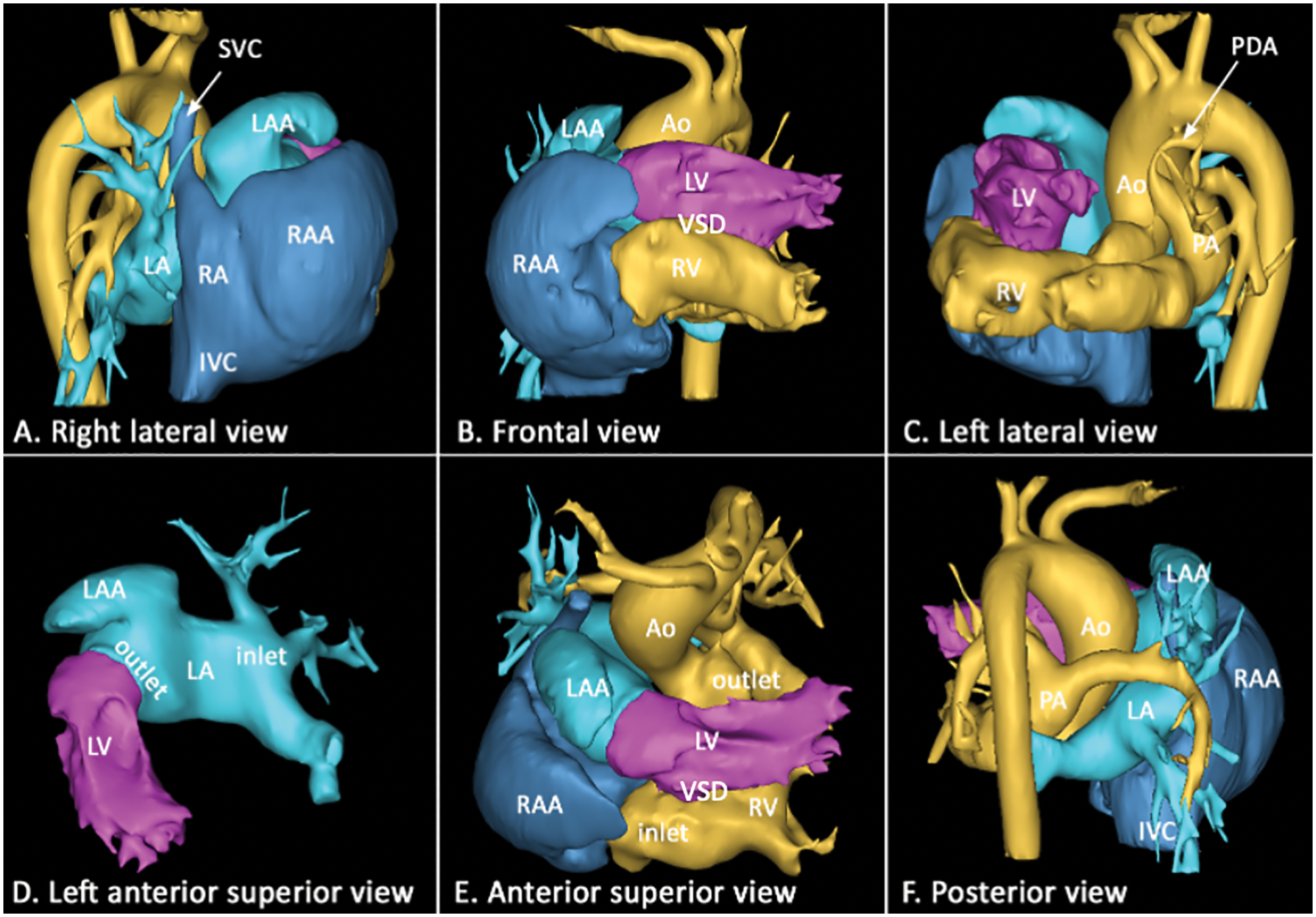 Figure 1: Volume-rendered computed tomographic angiograms obtained in 6 different views showing situs solitus with an unusual interatrial relationship. The left atrium is elongated anteriorly, superiorly, and rightward to connect to the anteriorly located left ventricle. The left atrial appendage is juxtaposed above the right atrial appendage on the right side of the arterial trunks. The left and right atria have concordant connections to the super-inferiorly related left and right ventricles, respectively. Both arterial trunks arise from the inferiorly located right ventricle

He initially had mild pulmonary stenosis. However, cardiomegaly and pulmonary congestion progressed into tachypnea and chest retractions. Thus, we performed pulmonary arterial banding one month after birth via thoracotomy. Cardiac catheterization at six months of age revealed good pulmonary arterial beds and adequate mean pulmonary arterial pressure of 13 mmHg; pulmonary vascular resistance was calculated as 2.3 Wood unit m2. Since the patient had a very large, perimembranous inlet extended VSD and deeply positioned great vessels from the inferiorly located RV, we considered that it would be geometrically difficult to perform intracardiac baffling despite both ventricles being sizable. This patient had a unique and highly complex cardiac anomaly, in which surgical decision was difficult. Therefore, 3D modeling, and printing service was outsourced to the Hospital for Sick Children in Toronto where a cardiac radiologist did postprocessing of the anonymized CT images using commercially available software programs (Mimics Medical and 3-Matic Medical, Materialise, Leuven, Belgium) and the models were printed using a commercially available 3D printer (Objet 260 Connex, Stratasys, Rehovot, Israel). We discussed surgical options: biventricular repair vs. Fontan palliation based on 3D-printed model, computed tomography scan, and echocardiography. By careful and extensive examination of the 3D-printed model, we decided to perform Fontan-type palliation due to the horizontal interventricular septal alignment and the spatial relationship of the inferiorly located RV and postero-inferiorly located aorta, which would make the baffling procedure extremely difficult (Fig. 2). At seven months, we performed a bidirectional cavopulmonary shunt and a Damus-Kaye-Stansel procedure to avoid potential subaortic stenosis due to the hypertrophied conal septum. The 3D-printed model indeed helped us understand the complex anatomical relationship between the atria, ventricles, VSD, and great arteries in the heart. The extracardiac conduit Fontan procedure, without fenestration, was performed at 33 months of age. The patient is currently a very active 9-year-old boy whom we follow up at our outpatient clinic.

The case described in this report showed an extremely unusual relationship between the chambers, including concordant atrioventricular connection to L-looped ventricles in the setting of situs solitus and levocardia, right-sided juxtaposition of the atrial appendages, superoinferiorly related ventricles with the left ventricle on top of the right ventricle, and double outlet right ventricle with the arterial trunks inferiorly located in the posterior mediastinum above the diaphragm. Concordant connection of the normally related atria to the L-looped ventricles is extremely rare [3–5]. Anderson et al described that there was disharmony between the atrioventricular connection and segmental combinations in these hearts [4].

The disharmonious connection was associated with the unusually elongated left atrium with its appendage juxtaposed on top of the right atrial appendage, and forward, superior and rightward displacement of the mitral valve annulus. The ventricles are superoinferiorly related and the four chambers of the heart were oriented in the coronal plane instead of the axial one, which is similar to that described in so-called topsy-turvy hearts [6–8]. In contrast to most hearts with superoinferior relationship of the ventricles including topsy-turvy hearts in which the right ventricle is the superior ventricle, the current case had the left ventricle on top of the right ventricle. The origin of the arterial trunks from the ventricle near the diaphragm in topsy–turvy hearts is associated with a low position of the aortic arch causing elongation of the head and neck branches of the aorta and stretching and narrowing of the airway. In the current case, the aortic arch was normally positioned despite the abnormally low position of the aortic root. In addition, there was no airway narrowing. Furthermore, this case cannot be explained by a simple counterclockwise tilting of the cardiac axis because the great vessels were located far posteriorly rather than anteriorly.

The 3D-printed model has been used for providing unequivocal perception of complex heart diseases and simulation before the surgical procedure [9]. This complex heart anatomy, in our case, was challenging to understand and determine whether biventricular repair was possible. The authors and colleagues at our center agreed upon the usefulness of 3D printing in the current case. Since the two ventricles were balanced in this complex DORV anatomy, we discussed the possibility of two ventricular repairs by baffling from the VSD to the aorta based on 3D-printed model. This model helped us to easily understand intraventricular anatomy and spatial relationship. Therefore, surgical planning could be made more readily. We decided to perform the Fontan palliation procedure due to the twisted ventriculoarterial plane and far posteriorly located great arteries and were able to avoid unnecessary ventriculotomy to close the VSD with the aid of 3D-model. Obviously, the 3D-printed model provided us with a more intuitive understanding of the spatial orientation of this complex anatomy.

We report a rare case of superior-inferior ventricles with concordant atrioventricular connection, L-looped ventricle, and a posteroinferiorly tilted aorta and pulmonary artery. The 3D-printed model clearly showed the anatomy and relationship of the atria, ventricles, and great arteries.

Funding Statement: The authors received no specific funding for this study.

Conflicts of Interest: The authors declare that they have no conflict of interest to report regarding the present study.