Causes of Death after Congenital Heart Surgery in Children

Abstract: Background: This retrospective cohort study aimed to explore the causes of death in children with congenital heart disease (CHD) after cardiac surgery in one of the biggest cardiac centers for children with CHD in China. Methods: A total of 26,856 children undergoing cardiac surgery from January 1, 2012 to December 31, 2019 were included. Based on the clinical data, the causes of death were divided into ten categories and further compared among different periods, types of CHD and surgical procedures. Results: Of all patients, 513 (1.9%) died (median age 162 d, median weight 5.6 kg). The mortality in 2016–2019 was lower than that in 2012–2015 (1.4 ± 0.3% vs. 2.5 ± 0.3%, p = 0.005). A total of 42.5% of children died of heart failure, and 32.9% died of residual anatomic defects. Patients with transposition of the great arteries tended to die from residual anatomic defects (21.9%), while those with double-outlet right ventricle (20%) and single ventricle (20%) tended to die from pulmonary hypertension (PH) (p = 0.006). After biventricular repair, children tended to die from heart failure (90.4%), while after single-ventricle repair, children tended to die from PH (50%) (p < 0.0001). There is a negative correlation between mortality and the ECMO implantation rate (r = −0.898, p = 0.002). Conclusions: Heart failure and residual anatomic defects were the main causes of death after cardiac surgery. The cause of death patterns differed among CHD types and surgical strategies. ECMO may be a life-saving tool when other conventional therapies do not work.

The global prevalence of congenital heart disease (CHD) at birth is estimated to be 1 per 1000 live births [1]. The diagnostic and treatment methodologies for CHD have dramatically improved over the past 80 years, and the survival rate of infants with critical CHD has improved by almost 20% in a survey of North America [2]. Reports from Belgium and Sweden found that 90–95% of children with CHD survived into adulthood [3,4].

However, in China, the overall prevalence of CHD is 8.98 per 1000 live births and that of critical CHD is 1.46 per 1000 live births, as reported by a national survey [5]. The first specialized CHD team was established in the mid-1970s. After nearly 40 years of hard work, an increasing number of children’s heart centers have been founded. At present, the mortality of CHD has dropped to 2–3% in a few professional pediatric heart centers that have reached the advanced international level [6].

However, literature on mortality and causes of death after cardiac surgery in children with CHD is very limited [9–11]. As one of the largest children’s CHD centers in China, our heart center treats more than 3,700 surgical cases every year. The patients are getting much younger and more complicated. The purpose of this study was to analyze the recent mortality data and explore the main causes of death in children with CHD after cardiac surgery.

This was a retrospective study of children undergoing cardiac surgery from January 1, 2012 to December 31, 2019 and was approved by the medical ethics committee of Shanghai Children’s Medical Center, School of Medicine, Shanghai Jiaotong University (SCMCIRB-W2020008) on February 27, 2019. The requirement for patient consent was waived. The age of the patients was under 18 years. In-hospital death was defined as any death occurring after the cardiac surgical procedure but before hospital discharge. ECMO might be initiated immediately after surgery in the operating room, as cardiopulmonary resuscitation in the cardiac intensive care unit (CICU), or selectively due to circulatory instability in the CICU. The ECMO implantation rate referred to the ratio of the number of ECMO cases to the number of cardiac surgeries in the same year.

The patient’s diagnosis was based on echo, CT, MRI, or cardiac catheterization, combined with intraoperative findings or pathology. The surgical procedure was divided into single-ventricle repair and biventricle repair. Single-ventricle surgery included systemic-to-pulmonary shunt, Glenn, and Fontan surgeries. Patients with an unstable hemodynamic status were considered to have critical CHD by doctors in the CICU and a high pediatric risk of mortality (PRISM) score.

The causes of death were discussed and concluded by the surgeons and the doctors in the CICU. Based on the clinical data, especially development of the disease and treatment in the CICU, the main causes of death were divided into ten categories. The causes of death mainly included heart failure, residual anatomic defect, cardiac arrest, pulmonary hypertension (PH), sepsis, abandoned therapy by the parents or guardians with custody, respiratory failure, neonatal necrotizing enterocolitis (NEC), disseminated intravascular coagulation (DIC) and brain death.

The data were analyzed using SPSS 22.0 (IBM, Armonk, NY, USA). Data with a normal distribution are presented as the means ± standard deviation (SD). Non-normally distributed values are presented as medians and interquartile ranges (IQRs, 25th and 75th percentiles), and the medians of the two groups were compared using the Mann-Whitney U test. Categorical data are represented as frequencies and percentages, and the chi-square test was used for testing. Correlation analyses of mortality, incidence of heart failure, and ECMO implantation rate were performed by Pearson correlation analysis. A p-value <0.05 was considered statistically significant. 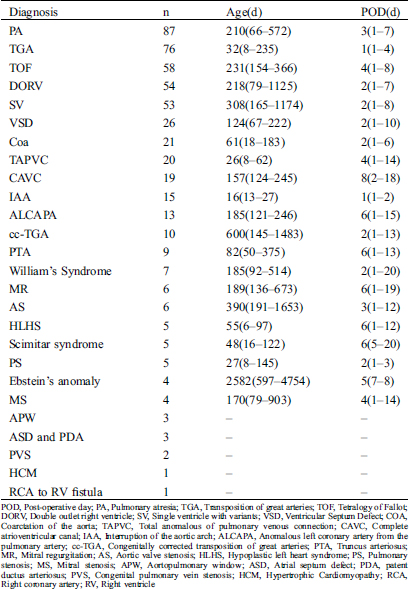 Table 3: Comparison of causes of death 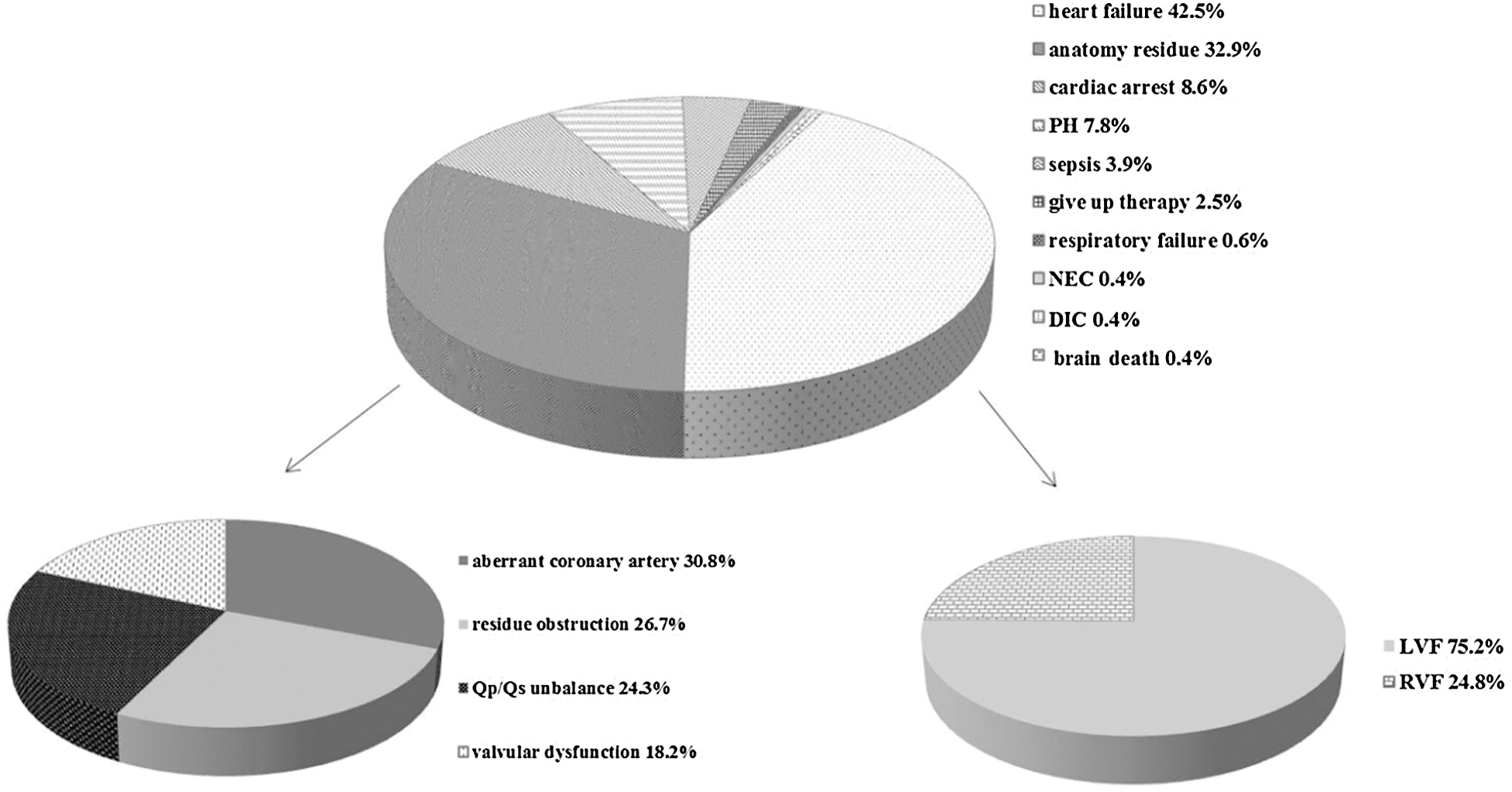 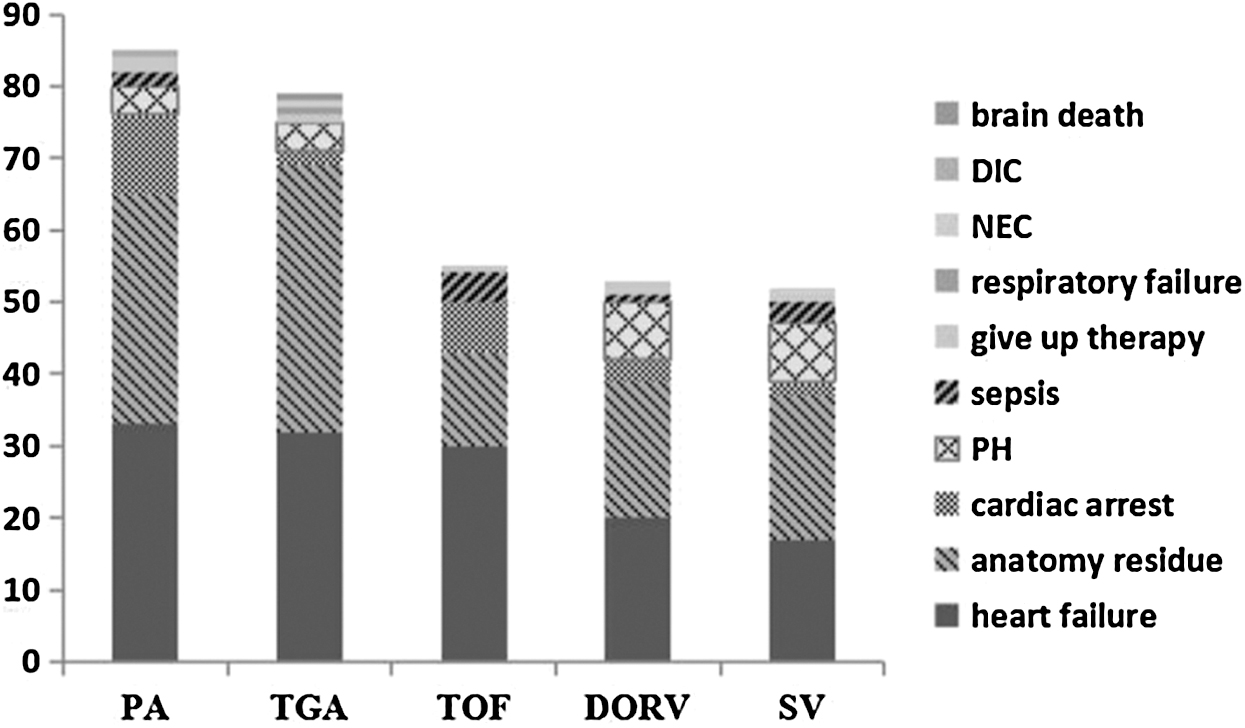 Figure 2: Causes of death after different types of CHD repair

3.4 Correlation between ECMO and Mortality 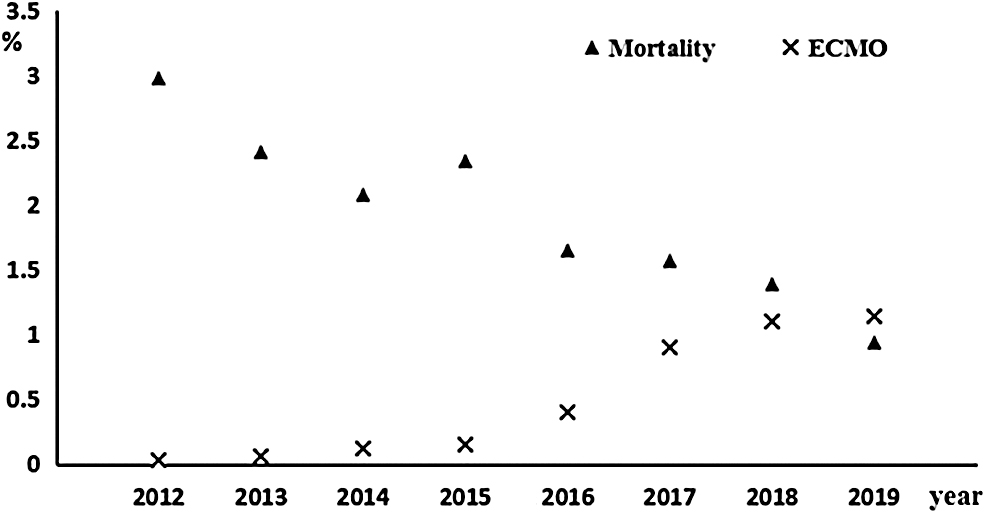 The study also found that deaths mainly occurred at a young age and in those with low weight, with children <6 months accounting for half of the deaths (50.9%) and children <5 kg accounting for nearly half of the deaths (44.8%). Moreover, the weight in 2016–2019 was significantly lower than the weight in 2012–2016 (Z = −2.14, p = 0.03). Similarly, Alsoufi [12] reported that underweight (≤2.5 kg) was associated with a significant increase in hospital mortality (OR, 2.15; p = 0.002). Therefore, some new clinical monitoring and treatment methods have focused on this population, aiming to improve the survival rate of younger and low-weight patients. Some studies demonstrated that multichannel near infrared reflectance spectroscopy could non-invasively monitor tissue oxygen supply, including that to the brain, kidneys, gastrointestinal tract and limbs, in real time in CHD patients with younger age and lighter weight [13,14].

The main cause of death after cardiac surgery in our study was heart failure (42.5%), which was characterized by low cardiac output. It was reported low cardiac output occurred in 25–65% of pediatric patients with CHD undergoing cardiac surgery with CPB support [15]. In a report from Boston Children’s Hospital, 19% of the deaths were due to ventricular failure, which was much lower than the rate in our study [16]. Studies showed immature myocardium was extremely sensitive to extracellular calcium compared to mature myocardium [17,18]. This might also be one of the reasons why most of the deaths were concentrated in the young age population in our study.

With regard to the distribution of causes of death among different CHD types, our study showed that those with TGA tended to die from residual anatomic defects (37/169, 21.9%), and 28 of the 37 patients had aberrant coronary arteries. Similarly, another study showed coronary anomalies were present in 33.7% of TGA patients, and coronary sinuses with more than 1 ostium were associated with a significantly increased risk of postoperative death (hazard ratio 2.58) [19]. However, an increasing number of recent studies have demonstrated that aberrant coronary arteries might not impact mortality after TGA repair because of modified surgical techniques using double coronary buttons with an unroofed intramural course, a single coronary button, or aortopulmonary fenestration [20,21].

Another special cause of death that differed among CHD types and surgical repairs was PH in not only patients with SV disease (8/40, 20%) but also after single-ventricle repair (20/40, 50%). PH, as an independent cause of death, was reported in 8% of patients after cardiac surgery in Boston Children’s Hospital, and similarly, the rate was 7.8% in our study [16]. PH may be a risk factor for early and late mortality after both Glenn shunt and Fontan operations [22]. Especially after the Fontan operation, a slight increase in pulmonary vascular resistance would lead to a dramatic decrease in cardiac output as the pulmonary circuit has no pump [23]. Thus, maintaining a low pulmonary vascular resistance (PVR) is essential to guaranteeing durability early after single-ventricle repair in patients with a high risk of PH caused by CPB [24]. The updated consensus statement on the diagnosis and treatment of PH of the European Pediatric Pulmonary Vascular Disease Network suggested that the hemodynamic threshold for operability pre-Fontan surgery was probably a mean transpulmonary pressure gradient ≤6 mmHg in children/young adults with single-ventricle physiology [25].

In addition, our study showed a strong negative correlation between mortality and ECMO implantation rate (r = −0.898, p = 0.002), which indicated that ECMO may be a life-saving tool when other conventional therapies do not work. The use of ECMO for cardiac failure has steadily increased in recent years, and it was reported that up to 2–5% of all children undergoing cardiac surgery require mechanical cardiac support with ECMO in the postoperative period [26,27]. Compared with these data, the ECMO rate in our center was much lower, at 0.03% in 2012 and rising to 1.14% in 2019. The overall survival rate of patients with ECMO support was 40–50% in the literature [28,29]. A study in our hospital showed that 36.4% of patients were discharged successfully after ECMO resuscitation, which suggests that one-third of the patients may survive after resuscitation supported by ECMO [30].

The primary limitation of this study is its retrospective nature and reliance on a review of medical records. Providing the actual causes of death after surgery for CHD is difficult because of the multiple processes involved and the different criteria and points of view of people who are involved in the process of assigning the cause of death. In addition, it was carried out at a highly developed and specialized center with substantial expertise and, therefore, might not reflect the entire situation in China. Despite these limitations, our study provides some important insights into the patterns of causes of death and potential improvements for strategies that might reduce mortality after congenital heart surgery. Specifically, close attention should be paid to these causes before surgery, and top priority should be given to the careful evaluation of these factors related to different types of CHD and surgical procedures.

Conflicts of interest: The authors declare that there is no conflict of interest.